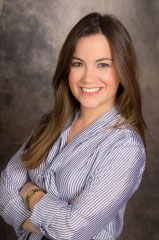 Aileen Cardona-Arroyo, a senior analyst at Hart Research, earned her MA and PhD in government from Cornell University, where she became the first Puerto Rican to do so. A native of San Juan, Puerto Rico, she is fully bilingual and received her BA in political science from the University of Puerto Rico-Rio Piedras Campus.

Aileen has extensive training in a diverse set of quantitative and qualitative research methods, including survey design, multi-variable regressions, experimental design and content-analysis. Aileen’s areas of research include persuasive political communication, public opinion and political participation and she is an expert on immigration and Latinx political behavior.

Before joining Hart Research, Aileen was a political science professor and the director of Latinx studies at Pace University in NYC, where she taught courses on American government and the Latinx experience in the United States. She is also a former post-doctoral fellow at Southern Methodist University’s (SMU) J.G. Tower Center for Political Studies in Dallas. During her time at SMU, Aileen led the launch of a partnership with the Latino Center for Leadership Development (LCLD) where she served as a bridge between academic research on Latinxs and a variety of stakeholders in policy and politics.