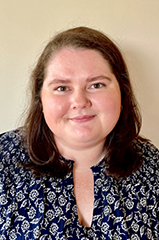 Courtney Couillard is an analyst at Hart Research Associates. She joined the firm in 2017 as the research associate to leading pollster Fred Yang. Alongside Yang, she has worked on political races across the country, from county executive to the U.S. presidency. She has experience on both qualitative and quantitative research projects for clients including Senator Jon Ossoff (GA), Senator Bob Casey (PA), Elaine Luria (VA-2), and Jennifer Wexton (VA-10). She was also on the polling team for Stacey Abrams’s historic candidacy for Georgia’s governor in 2018 and later for her voting rights organization, Fair Fight. Her research has been particularly focused on electorate expansion and mobilization, and she is proud to have conducted strategic research for numerous first-time female candidates as they seek both local and federal offices.

Courtney graduated from Barnard College of Columbia University in 2017 with a major in political science, focusing on women running for political office. She resides in the Washington, DC, area.