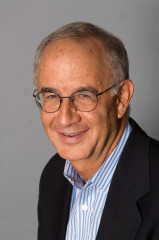 Peter D. Hart is regarded as one of the top analysts of public opinion in the United States. He is a leading shaper of national trends and political messages. He founded Hart Research in 1971, and since 1989 has been the pollster for NBC News and The Wall Street Journal. His political clients have included leaders in the forefront of American politics over the past half century, from Hubert Humphrey and Jay Rockefeller, to Edward Kennedy and Bill Clinton. He has represented more than 55 US senators and 40 governors. His work with Hart Research has focused on public policy and cultural issues and has included work for clients such as the Smithsonian Institution, Habitat for Humanity, UNICEF, and the Bill & Melinda Gates Foundation. In the international realm, he has conducted studies in South America, Europe, Asia, and Africa. He has conducted strategy planning projects for clients such as Coca-Cola, AT&T, and Tiffany & Co.

The National Journal named Peter as one of its 150 national leaders who shape federal government policy. Sometimes called the dean of this generation of pollsters, he has covered election night news for either NBC or CBS since 1964. In 2002, Peter was awarded a Lifetime Achievement Award for Outstanding Contribution to Campaign Consulting by American University’s Campaign Management Institute.

Over the past decade Peter has worked to spot society’s newest directions and trends. Along with Dan McGinn, he has worked closely with major companies such as 3M and CitiGroup to help them navigate consumers’ ever-changing attitudes and expectations.

Peter has been acknowledged by the leaders in the field as one of the most astute observers of public attitudes in politics and consumer attitudes. David Brooks of the New York Times called him the “uber pollster,” and Albert Hunt of Bloomberg referred to the NBC/Wall Street Journal poll as the “gold standard” of public polling.

Peter has appeared on Meet the Press, The Today Show, and Rock Center with Brian Williams. For the past 30 years, he has been a Woodrow Wilson Visiting Fellow. He has taught public opinion and public policy at Duke University, the Annenberg School for Communication at the University of Pennsylvania, and the University of California, Berkeley. In the fall of 2013, he was a Shorenstein visiting fellow teaching at the JFK School at Harvard University.