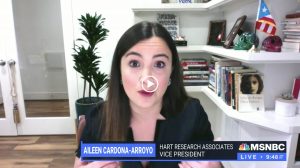 Hart Research Vice President Aileen Cardona-Arroyo appeared on MSNBC’s Alex Witt Reports, where she discussed the findings of the NBC News/Telemundo poll on the Latino electorate.

Watch the interview here and read the additional coverage here.

Consumer spending has fallen this holiday season, with 41% of shoppers saying they plan to spend … END_OF_DOCUMENT_TOKEN_TO_BE_REPLACED